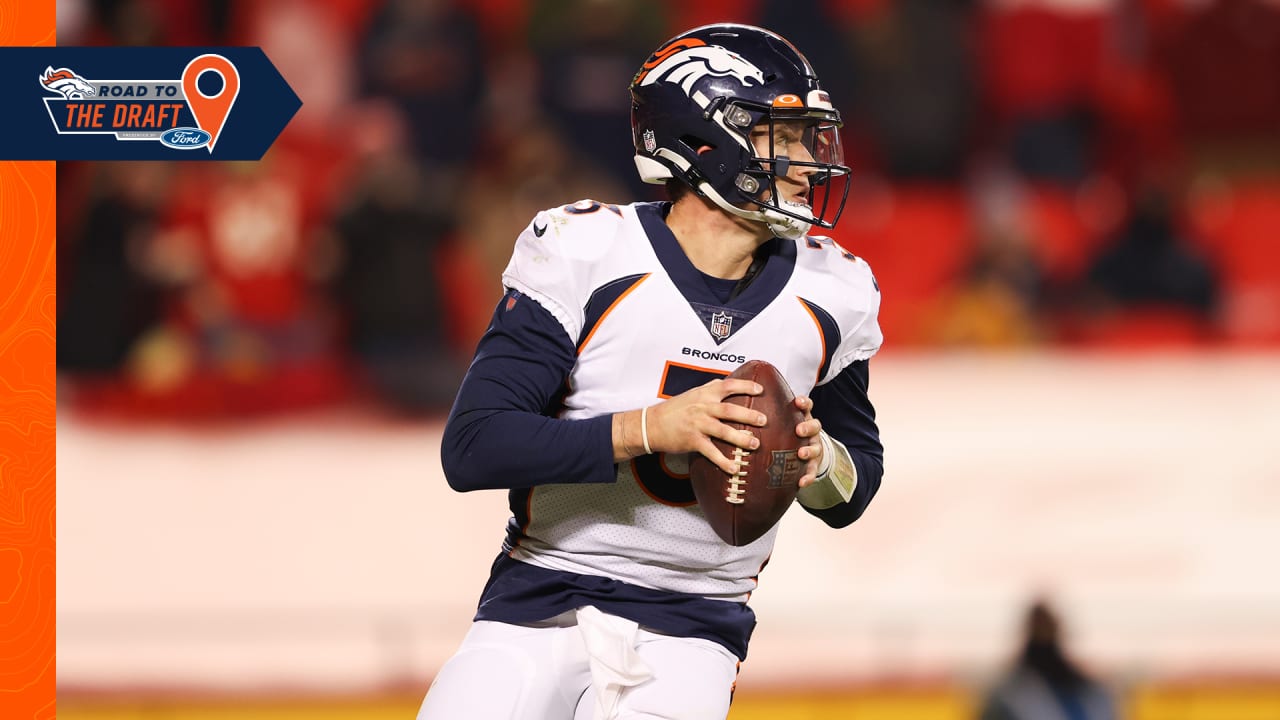 ENGLEWOOD, Colo. — As the 2021 NFL Draft approaches, the Broncos' objective at the quarterback position has not changed.


With a week to go until the opening round, General Manager George Paton reemphasized on Thursday the team's desire to add competition to the quarterback room. Yet while Paton understands that the team's fan base continues to wonder when and how that competition will arrive, he will continue to employ a measured approach.


"I understand it," Paton said of the questions from the fan base about the quarterback position. "We do like Drew Lock. What we don't want to do is force it [and] overpay a guy to come in and maybe he's not as good as the guy we have. And maybe he's not good enough to compete. We want to get the right guy, and we still have time.


"There's a trade market. You have the draft. The landscape may change after the draft. A team drafts one, maybe that quarterback's on the market. We're going to be patient and not force it. But we do realize we want competition, and I've said that since I've gotten here. That hasn't changed."


Lock, the incumbent starter, has completed 59.1 percent of his passes for 3,953 yards, 23 touchdowns and 18 interceptions in 18 career starts. He has showed flashes of excellence at the position during his limited stint as the starter, as he tossed four touchdowns against Carolina, helped Denver to a road win over the Patriots and played efficient football against the Raiders to end the season.


The 2019 second-round pick has struggled at times with turnovers — he played just two games in 2020 without a giveaway — but he posted a 7-to-2 touchdown-to-interception ratio over the final four games of the season.


While Paton did not commit to Lock as the team's Week 1 starter in 2021, he did say Lock has continued to improve.


"We're really high on Drew," Paton said. "I like seeing Drew here every morning when I come in. He's working hard. He's trending in the right direction. As you know, he has a lot of talent. I think he's becoming a better pro. We're going to still look at the quarterback position. I've said since I got here, we want to bring in competition. That's the goal, and we plan on doing that."


If Denver aims to add that competition through the draft, North Dakota State's Trey Lance and Ohio State's Justin Fields could be among the Broncos' options.


"They're different," Paton said of Lance and Fields. "Both elite athletes, both really strong arms. Both really talented, smart. They have all the intangibles you want in quarterbacks and in football players. They're raw, a little bit. Really high ceilings for both players."


The evaluation of Lance, Fields and other collegiate quarterbacks — especially in relation to Lock — is not an easy process.


"The difference with college is you're projecting," Paton said. "You're projecting how a 20-year-old, 21-year-old individual, how he's going to react in a different environment with 25-, 30-, 35-year-old players. How is he going to react to the coaching, a different city, being on his own. It's a big difference between pro scouting and college scouting. [In] college scouting, you have to project and there's a lot of work [that goes] into that. You've got to dig deep into each player, whether it's his mental, whether it's his character, psychological testing, the analytics. A lot of things go involved when trying to project a player, and there's no exact way of doing that."


As Paton outlined Thursday, teams' desires to find that franchise player could result in a historic run on quarterbacks next week.


"It's the toughest position to play in sports," Paton said. "It's the most important position to play in probably all sports. I'm generalizing. You need a good quarterback to win and sustain year in and year out. You need a good one. Do you need a franchise [quarterback]? Do you need a top-five [guy]? No, you can still win without one, but it's important to a team's success to have a good quarterback. That's why you might see five go in the top 10."