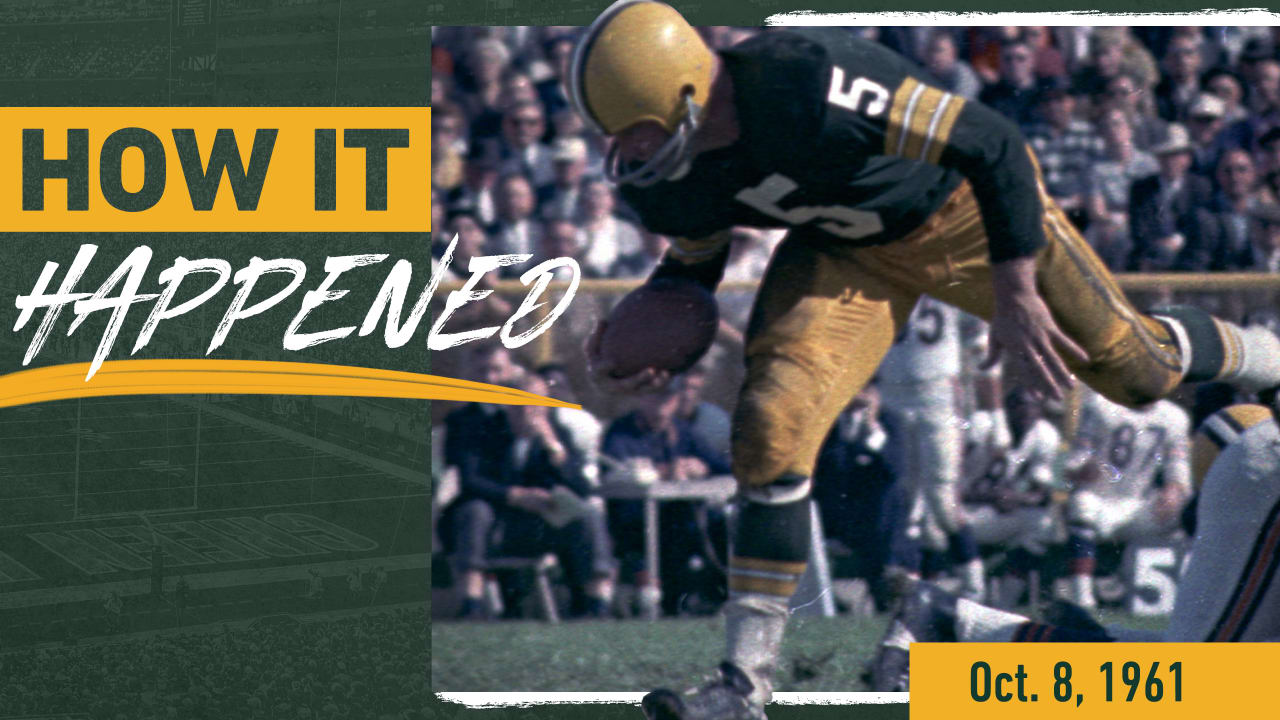 Resuming a series that began last summer, packers.com is taking a look back at some of the team's single-game records and how the individual set the mark. The series continues with Paul Hornung's 33 points on Oct. 8, 1961.


GREEN BAY – The only thing he didn't do was score on defense.


But if given the chance, he might've, considering all the interceptions the Packers were racking up that day.


In 1961, future Hall of Famer Paul Hornung – serving as half the 1-2 punch at running back with Jim Taylor, as well as handling the Packers' placekicking duties – was coming off his NFL record 176-point season, a mark that stood for decades. But even in that big year, Hornung hadn't scored 30 points in a single game.


The franchise record then was Don Hutson's 31, consisting of four touchdowns and seven extra points on Oct. 7, 1945, vs. the Lions, with 29 of those points coming in the second quarter.


In the fourth game of '61, the Packers hosted the Colts at "new" City Stadium, as Lambeau Field was named then, and Hornung began the assault on Hutson's mark right away.


On the fourth snap of the game, he ran 54 yards for a touchdown and kicked the PAT for his first seven points.


After the Colts tied the score at 7 early in the second quarter, Hornung kicked a 38-yard field goal for a 10-7 Packers lead.


Three plays later, Jesse Whittenton intercepted Johnny Unitas to give the Packers the ball in Baltimore territory, and Hornung finished off the ensuing drive with a 1-yard TD run. After his extra point, Hornung had scored all of Green Bay's 17 points for the 17-7 halftime score.


In the third quarter, the game became a rout, as Dave Hanner intercepted Unitas on the third snap of the second half, putting the ball inside the Baltimore 10. Hornung caught an 8-yard TD pass from Bart Starr and kicked the PAT.


A couple of possessions later, it was Willie Wood's turn to pick off Unitas, and Hornung finished off that drive with a 10-yard TD run. After the PAT, the third quarter ended with the score Paul Hornung 31, Baltimore Colts 7.


Hornung had set a personal best and tied Hutson's single-game team record with one quarter to play. He would have the record alone just moments later.


Three plays into the fourth quarter, the Colts punted, and Wood ran it back 72 yards for the score. Hornung's kick gave him 32 points.


Then on the first snap of the Colts' next possession, Unitas lost a fumble that Dan Currie recovered, and Taylor's short TD run preceded another Hornung PAT to make it 33 points and a 45-7 final.


On the day, Hornung had three rushing touchdowns, one receiving TD, six PATs and one field goal. He rushed 11 times for 111 yards and caught three passes for 28 yards.


Green Bay's defensive performance had plenty to do with Hornung's record-breaking day, as the Packers finished with six interceptions in all – five against Unitas and another from Lamar McHan.


The victory was the Packers' third straight after a season-opening loss to the Lions in Milwaukee, and the winning streak would stretch to six games before, strangely enough, the Colts snapped it with a 45-21 triumph in Baltimore.


The Packers would immediately put together another four-game winning streak on their way to winning the Western Conference with an 11-3 record, 2½ games clear of second-place Detroit (8-5-1). A blowout victory over the New York Giants on New Year's Eve would give the Packers their first of five NFL titles in the Vince Lombardi era.


Hornung would finish the 1961 season with 146 points, 30 shy of his record total from the previous year, but a number that still ranks No. 2 for a single-season in team annals. He also won the NFL's MVP award that year and went on to add the MVP in the NFL Championship Game, scoring 19 points in the 37-0 win for the title.
You must log in or register to reply here.
Share:
Share
Top