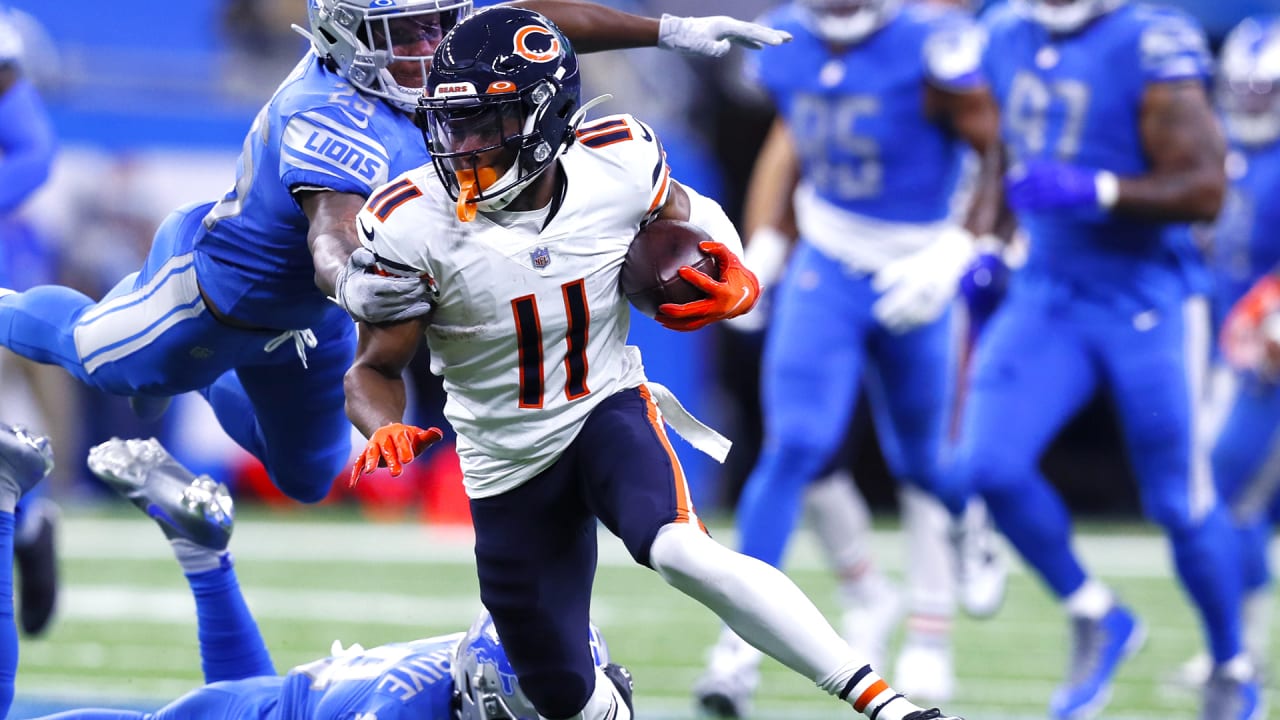 Mooney ran the 40-yard dash in 4.38 seconds at the NFL Combine, making him one of the fastest players in his draft class. He was able to show how that speed would translate to the field when Mitchell Trubisky found him for a 19-yard gain in the second quarter.


"What a great play," said receivers coach Mike Furrey. "Obviously, his first catch in the NFL, but the one thing I'm most impressed about is just his body demeanor, his mentality. It's like he's a five-year veteran in this league already. That game [Sunday] did not phase him one bit."


Mooney finished with three catches for 38 yards, the most Week 1 yards by a Bears rookie receiver since Alshon Jeffery in 2012.


Mooney may soon fill the role once filled by Taylor Gabriel, who missed much of the 2019 season due to injury. With his first NFL reception, Mooney showed the type of elusiveness that can spread the field and keep defenses guessing.


"We got the same look that we got in practice," said Mooney. "It looked the same way. I just knew I had to show my speed and they would respect that. During the route, I knew the ball would be there before I even broke. Just locate the ball and run my route and make something happen after that."


Even after making the 53-man roster, Mooney wasn't a sure thing to make an impact. Riley Ridley, the Bears' fourth-round pick in 2019, didn't appear until Week 12 last season. However, Mooney was confident going into Detroit.


"I didn't have any jitters," said Mooney. "I was more normal. I was actually more calmer than I was before any game. I didn't even listen to music pregame. I was calm. Kinda way too chill."


Mooney's most significant adjustment may have been how slow the game moved. Mooney played in a no-huddle offense at Tulane that prioritized playing at breakneck speed.


"We saw the speed that he provides to our offense, to our room," said Furrey," but I just think when you go back, you look at him as the player that he is. He's very mature, and to have patience like that in a game, to put the jets on to get your depth for your first route in the NFL, you know you're getting the ball – I think that shows a really bright future for this young man."


Mooney is listed as three inches taller than Gabriel and doesn't see himself as limited to playing as a slot receiver.


"I feel like I can play anywhere on the field, outside, inside," said Mooney. "Wherever coach [Matt] Nagy wants me to be, I'm available anywhere, at any time, on the field. I'm confident and comfortable anywhere."


Mooney's primary goal at the moment is to earn the trust of the coaching staff and carve out a more prominent role for himself in Nagy's offense.


"Just being a bigger playmaker during the season," said Mooney. "As the season goes, gaining a more stronger role. Having the coaches gain more confidence in me and trusting me with what I can do. Just letting me ball out."
You must log in or register to reply here.
Share:
Share
Top